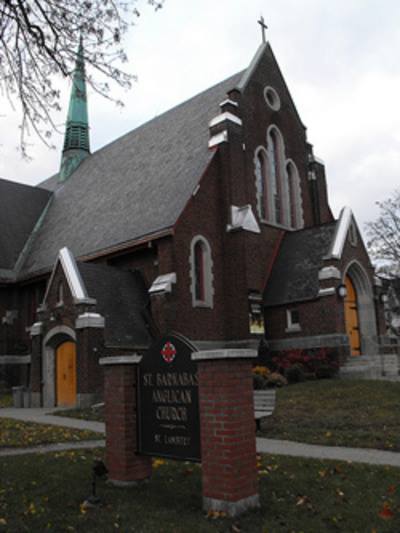 My family attended St. Barnabas, St. Lambert’s Anglican Church. Sometime in the late 60s, my two sisters and I decided to join the junior choir. This choir, made up of children and teenagers, sang the full Book of Common Prayer liturgy, led the congregation authoritatively in all the hymns, and performed a weekly anthem in four parts. The St. Barnabas junior choir was not just cute kids singing “Jesus Loves Me.” This was a working choir; an integral part of the service.

No sooner had the three of us been to a couple of practices than we were suiting up on a Sunday morning – red choir robes and a white surplice – to process down the aisle behind the crucifer and sing for the Sunday service. But it hadn’t always been this way.

But now, there weren’t enough children for two choirs – there were barely enough for one – and so, although we were new, we were allowed to sing with the real working choir right away. Our choir director, Hilda, theorized that the three of us wouldn’t contribute much to the singing, but at least we would fill up the gaps in the choir stalls.

And so my sisters and I discovered the privilege of arriving late to the Baby Boomer party. Before our post-1959 crowd was starting to make its presence felt on the planet, a population bulge had filled choir stalls to overflowing with children. When the occupants of the bulge grew up, they left behind a ready-made outline into which my sisters and I stepped unhindered.

We stayed in the junior choir for over a decade, beginning, yes, as bench warmers, but eventually becoming useful singers – well trained by Hilda – in the St. Barnabas junior choir.